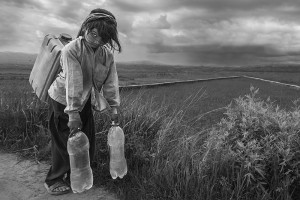 Art, along with photography, can be divided into good and bad, so some current styles and trends in a modern photography didn’t influence the evaluation of the photographs by the members of the jury, and neither this one. Therefore there is no special attractiveness and sensation about this photograph with an enigmatic name that would attract an attention of an observer at first sight, not even of the members of the jury.

What finally attracted their attention at first sight and while valuating the photographs are its characteristics, its social character that drives the attention to the most important actual questions and problems of an underdeveloped part of the world, especially to the existential questions and positions of people, their  doubts, suffering, fears, worries and a hard life. Although the photograph shows only one scope or one of the key issues – a problem of drinking water, besides the fact that it represents and interprets the given topic, it also shows the rest of the problems in these underdeveloped and poor countries.

An additional value of this photograph is that by this one photograph we can recognize the specifics of the author’s creative personality, his artistic character that is oriented to the reportage and portrait photography and to their meaning. This meaning and messages are ordering its dualistic nature where successfully coexist otherwise contradictory properties of the photograph, such as the simplicity of an expression and professionalism of photographic approach and a documentary of the time and condition and metaphorics of its meanings. Documentary shows in its originality and reality that talks about the problems in lives of people where children, too need to do hard physical work and metaphorics of a meaning reveals water as an universal archetype symbol for countless meanings, messages and life questions.

Haitham told us a few words about himsefl:
Haitham AL Farsi from Sultanate of Oman – Member in the Photographic Society of Oman.
Working in Bank in system support and started photography in 2012. Start my first photography trip on Jun 2014 to India after that had trips to Nepal Bangladesh and China.

… and about awarded photo:
The photo has been taken in Nepal and the small girl carries water to her family, the moment i saw her i wanted to help her but she was refusing since its her duty to deliver the water to her house. Immediately i took a couple of images of her.

Also Haitham send us text with which he is presented in Photographic Society of Oman:

Looking at the creases in the faces of some of the weathered subjects you get the sense that you have been given something of a voyeuristic window into the story of their lives, each line telling of a love lost, a labour endured or a young life that has already seen hardships. Meanwhile, other photos give you an insight into the lives of rural communities thousands of kilometres away in distant lands.
Haitham al Farsi’s work has taken him to India, Bangladesh, Nepal and China, with more trips in the pipeline.
Yet despite all this, from Sunday to Thursday, you’ll find him sitting behind a desk at a bank, working in technical support. “I’ve always been interested in arts,” he says. “Music and painting appealed to me from an early age.”
Haitham first picked a camera up in earnest in September 2012 and after teaching himself the art through research online, blogs and YouTube videos, along with a few pointers picked up from the Photographic Society of Oman, he has since been recognised with 71 international awards in what has quickly become his hobby and passion.